Sonny Fulks graduated from Ohio State University where he pitched four college seasons for the Buckeyes from 1971 to 1974. He deepened his baseball experience as a minor league umpire for seven seasons, working for the Florida State League (A), the Southern League (AA) and the American Association (AAA). He has written for numerous websites and, for the past fourteen years, has been a columnist and photo editor for The Gettysburg Magazine, published by the University of Nebraska Press, in Lincoln Nebraska. His interests include history, supporting amateur baseball, the outdoors, and he holds a double degree in music from Ohio State University.

In the final week of the Best of Ohio Tourney series, some thoughts on who’s improved over the past two monthsâ€¦ and how?

Pleasant Hill, Ohio – It’s the last weekend of the Best of Ohio summer tournament series for 15, 16, 17 and 18 year olds this weekend. And to those who believe that playing baseball in the summer only takes away the conditioning and rehearsals valuable for fall football … you can breathe easier.

“Hey, two of our best players aren’t here today,” Lancaster Cyclones coach Jason Polan said. “We had kids who had to go to football.”

He did not say whether they “had to” go or whether they “wanted” to go. Only, according to the tone of voice, that the Cyclones were at a disadvantage in their game with the 18u Miami Valley Prospects because they weren’t there. In the third round, his concern was justified.

The Prospects scored early in the first on three walks and an undeserved run and used their obvious â€œadvantageâ€ to secure a possible 8-0 shutout victory.

The obvious question after 30 summer baseball games for kids aspiring to play college baseball … is who has made the greatest strides in improving? The old back-to-school theme for a writing assignment: what I did during my summer vacation. 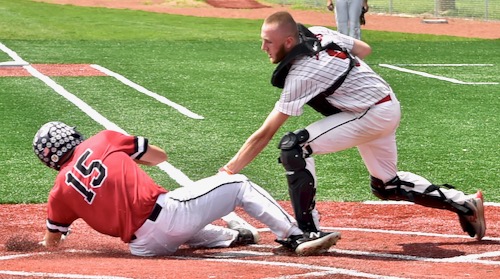 Miami Valley Prospects Kaden Echeman (Butler) scores on a sacrifice ball in the third inning of Thursday’s 8-0 victory over the Cyclones. (Photos by Julie Wright)

For Lancaster coach Jason Polan, the question is a little more complex as to who has made the most progress in his team.

â€œWe have to share a lot of athletes,â€ he said.

Lots of teams do.

â€œSo it’s not that easy to pick just one from the list. But our third baseman today – Zach Gallimore – has probably had a summer as good as anyone I could name. He’s matured, he’s a very good teammate and he’s very conscientious. Yes, he had a great summer.

In the other dugout, Miami Valley Prospects coach Chris Jones, himself a varsity player in Miami (Hamilton), took some time to consider a squad made up largely of high school graduates – many of whom played at Edison Community College in the fall.

Slusher is a tall, lanky right-hander who we saw at last year’s Best of Ohio tournament, which was impressive then and simply outscored the Cyclones, knocking out the game’s first six strikeouts.

â€œHe had some elbow pain this summer so we were pretty careful with him,â€ Jones says. “But he’s impressive, the way he goes straight to the hitters.”

Slusher offers a mid-80s fastpitch from a buggy-whip delivery, sometimes a handgun delivery. It’s very hard for righties to stand up against, and Slusher obviously throws in with a certain attitude. 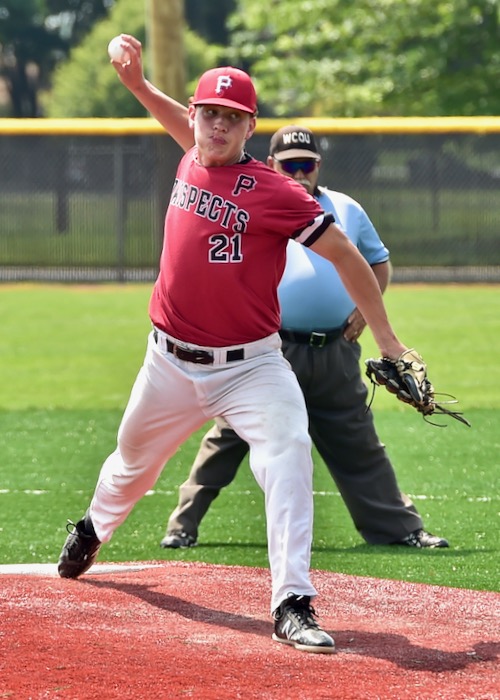 Prospects pitcher Jaren Slusher got off to an impressive start, pulling out the first six strikeouts.

On a hot and humid Thursday, when it wasn’t difficult to come off and pitch with some extension, he gave Cyclone hitters little luck, striking out nine batters in his shutout effort.

“The most important thing about playing like this this summer is just having more opportunities to play,” a Columbus Arsenal coach said recently.

â€œBecause of the weather in high school, you lose so many games some years. It’s a period of development that you can’t catch up onâ€¦ unless you’re playing in the summer. Yes, there is competition for the athletes because a lot of them play basketball and football, but when you play in this series you know that you are going to play every weekend for six weeks, from Thursday. through Sunday, and that helps offset school. “

This weekend wraps up the Best of Ohio, No-Pool Game series, where teams are putting them up or putting them up for the last time this summer – one final official tune-up ahead of playing varsity baseball in September. .

“And for some of them it might be the last weekend they play organized baseball if they aren’t signed up to play at the next level,” Tipp City assistant coach Eddie said. Meyers.

For high school students below 189u level, an opportunity to part ways with playing time competition next spring. Their respective coaches will know soon enoughâ€¦ what they did during the summer vacation.