They used a scorching start to beat Monroeville 4-1 and advance to Saturday’s ultimate game. St. Henry wins a chance to win his eighth state title.

Fairborn, Ohio – It’s not that often that a plan goes so perfectly. But that was the case Thursday afternoon for the St. Henry Redskins.

With an aggressive hitting team and an offensive approach that coach Tricia Rosenbeck calls “risk and reward,” the Redskins came out hot, served perfectly in their opening set and capitalized on that momentum for a possible 3-1 victory over the Huron County Monroeville Eagles… 25-12, 24-26, 25-15 and 26-14.

MAC teams live and die by this aggressive play philosophy, and when you’re on… you’re really on. On Thursday, St. Henry was REALLY active, serving 18 aces for the game and logging on 53 elimination attempts – a 60% save rate.

“They’re such a good team and they’ve served so well,” said Monroeville coach Kendra Snook. “They just picked our defense apart in the first set. They took us out of the system.

That’s the idea of ​​volleyball – serving well to make that first contact with the ball as difficult as possible. The Redskins have rarely done better. 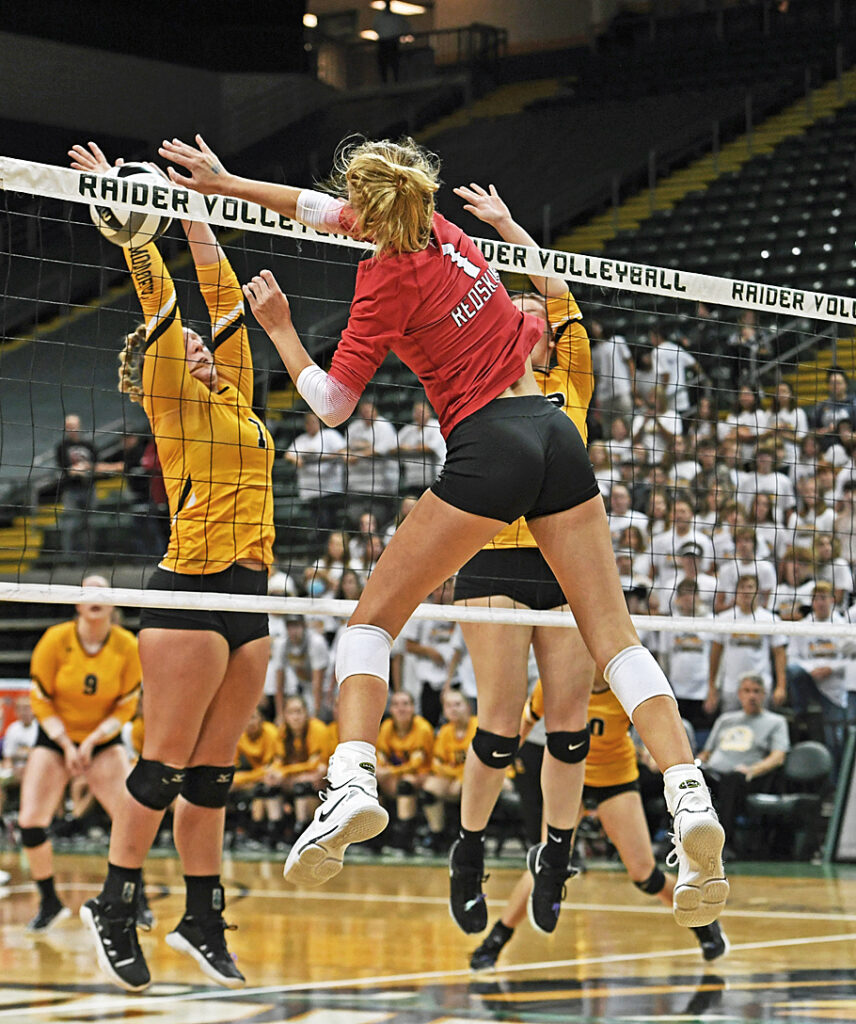 Choe Gels managed one of his 14 kills to score in the opening set of Thursday’s victory over Monroeville.

But no better offensively than St. Henry, who scored the first set with barely a miss of any kind… before someone missed a serve at the 2-2 point of the second game. Monroeville came out a little nervous and didn’t have a lead before taking the 3-2 advantage in the second set. And once they got their feet wet, they were formidable behind senior Graisyn Yoder, who led all of the game’s scorers with 24 kills.

The second set was home and away, tied 17 times before Monroeville finally tipped the winning point to tie the game, 26-24.

St. Henry came right back into the third set, a start from the first where they not only served well, but changed them – like a major league pitcher would. Some were laser shots, others were soft. This put the Eagles off balance enough that St. Henry took a comfortable lead and ended up winning the set, 25-15.

Kendra Snook spoke about her team’s strength afterwards – her ability to come back after losing a teammate during the season – and the fact that she is able to play in the face of adversity. Never more than in the fourth set.

St. Henry played confidently, comfortably, securing points production from Chloe Gels (14 kills), Carley Winner (11 kills) and Brianna Siefeing (18 kills); but Monroeville didn’t want to go away, coming back from small deficits throughout the tie 6 times, to lead once… and forcing St. Henry to find extra equipment after the Redskins took a late 24-19 lead. 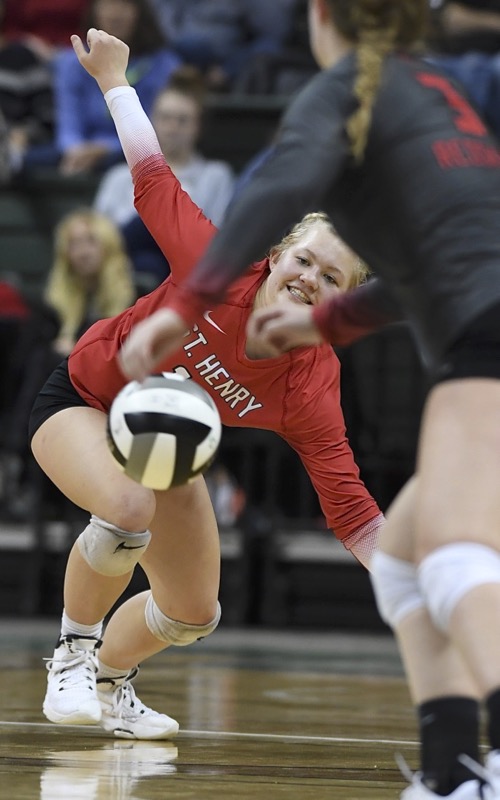 Rya Buschur is stretching for one of his 18 digs in the semi-final game with Monroeville.

At this point, the Eagles have scored five straight runs to tie the set at 24-24, and they earned it. St. Henry allowed Siefring to score the victory point three times. Twice she sank it deep into the Monroeville defense… and twice the Eagles got their hands on it, kept the point alive and ended up scoring.

But at 24-24, Siefring flipped again and tilted him a bit more on the line. This one did it… out of the hand of a defender and down to the winning point.

“I was so happy,” Siefring said afterward. “I felt like if I kept swinging I would end up getting one. I was so happy when we finally got it.

Monroeville, 23-5 for the year, was making his fourth appearance in the state semifinals, and the third time in the past four years. 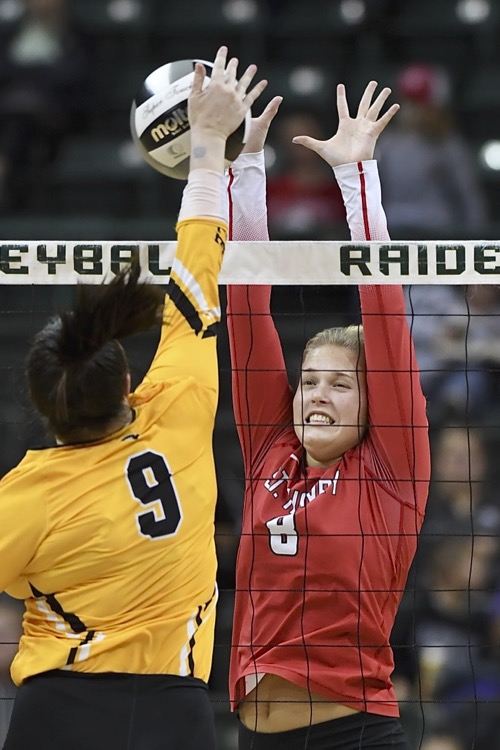 St. Henry, 22-6 after Thursday’s win, made his 15th Final Four appearance, seeking his eighth title, and the first since his last win in 2011.

“It’s disappointing to lose today, but our season is better to end here than in the district tournament. We went further than a lot of people thought.

“They were very, very good,” admitted Tricia Rosenbeck. “We knew Number 9 (Yoder) and # 10 (Maddie Daniel) were their go-to people and that they would get their wins. # 9 (Yoder) has been perhaps the smartest player we’ve played against all season. She was good at reading and putting balls in the corner, and tip when she needed it. She had a wonderful game tonight.

Some other figures: Grace Lange led the Redskins with 19 digs… Rya Buschur had 18… and Lydia Werling finished the game with 41 assists. Lauren Beyke had 9 of 18 serving aces.

St. Henry qualifies for the championship round on Saturday to face the winner of New Knoxville and South Webster.

‘The Spot’ restaurant in Sidney is proud to be the presenting sponsor of the 2021 OHSAA State Volleyball tournament on PressProsMagazine.com.