One of the pillars of Buckeye Nation has passed away. Bill Wells will be remembered for his character, his commitment and his spirit of giving. He passed away on Monday… at the age of 60.

The news hit The Ohio State University, Buckeye sports, and in particular… Buckeye baseball as a flash. Long-time benefactor, friend and noble supporter of “time and change”, Bill Wells, died at his home on Monday. Born June 19, 1961, he was 60 years old, and his impact and personal commitment to all things Buckeyes may never be replaced.

“He was a person who cared about everything,” Ohio State baseball coach Greg Beals said Tuesday. “And his interest went way beyond baseball. Bill Wells really cared about the players and their experience here. Buckeye baseball had no best friend.

He had a love for Buckeye baseball, and his family was instrumental in the building Bill Davis Stadium and supporting the program through scholarships and support from the Buckeye Diamond Club. The newly renovated stadium locker room is named after him…the suite of the Bill Wells baseball team. And his generosity has spread to other departments of the University, and largely unbeknownst to the public. Only a select few have truly come to know and appreciate the heart and nature of Wells.

“I was never a very good baseball player in high school, but I wanted to be,” he said with a laugh. “So I enjoyed experiencing the sport through our own baseball players. I wasn’t good enough to play at their level, but I enjoyed supporting them…to help each of them become better players through their experience at Ohio State.

“His commitment has always been the same,” said Buckeye Diamond Club President Frank Fraas. “He did so much for so many people anonymously…because he was just a good guy.” 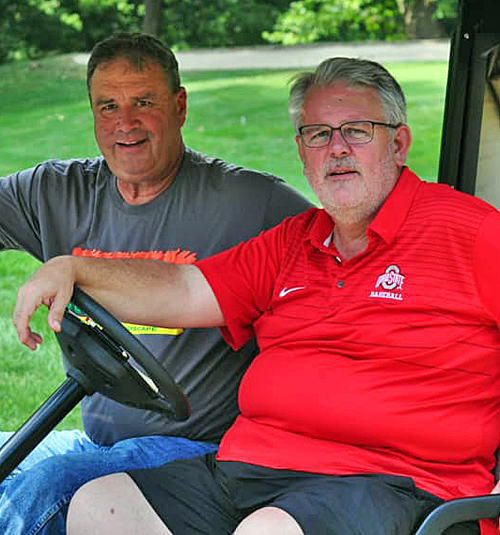 With Wells at the 2020 Annual Golf Fundraiser… No Ohio State baseball player has ever had a better friend than Bill Wells.

He loved history and appreciated the dedication – the commitment of others. On a trip to the Gettysburg battlefield with me and my longtime friend Tom Randall in 2019, Wells surveyed the landscape for two days in silent reflection. He didn’t say much. He just watched. It’s my fondest memory of Wells.

He was Ohio State’s patron saint of baseball thanks to his generosity in supporting endowments, team transportation…and simply being there for countless Buckeye Road games over the years. year. But his appreciation for college baseball went far beyond Lane Avenue and High Street. He was known throughout the Big Ten, by coaches, officials and contemporaries for his unparalleled commitment to the advancement of Big Ten baseball.

“Bill was a very loyal Buckeye baseball fan, but he was also a great friend to the other members of the Big Ten,” Michigan State coach Jake Boss said. “He always made a point of stopping by when they were playing here, going to dinner or saying hello if the Buckeyes were there to play football. I know he will be missed. He was a good man. My condolences to everyone in Columbus for their loss.

The phone rang on Tuesday, people calling to confirm the news, or to share a story, or a memory of why he was so special.

The answer is simple. He, as the man said, didn’t care…good things, good people, and good opportunities. His loyalty was unmatched. His commitment to helping others was beyond question, or even comprehension. His heart and his door were always open.

There aren’t many patron saints for college baseball. Ohio State was lucky to have Bill Wells.