The new ZTE Axon 40 Ultra has a main camera with a 35mm lens and now Motorola confirms that it uses 35, 50 and 85mm focal lengths common in conventional cameras. Is this the start of a trend?

After the ZTE Axon 40 Ultra smartphone introduced 16 (ultra-wide angle), 35 (main camera) and 91mm (telephoto) focal lengths, the Motorola model (which will be the Moto X30 Pro in China and the Moto Edge 30 Ultra, or Frontier, in global markets) offers three focal lengths that would satisfy the needs of many photographers: a 35mm, a 50 and an 85mm. While these values ​​may surprise those who only shoot with smartphones, photographers coming from conventional 35mm format cameras will be pleased to know that these focal lengths, which were – and still are – a staple in photography, make their way inside smartphones, instead of the usual 12, 24, and whatever value smartphone engineers have decided to use so far. 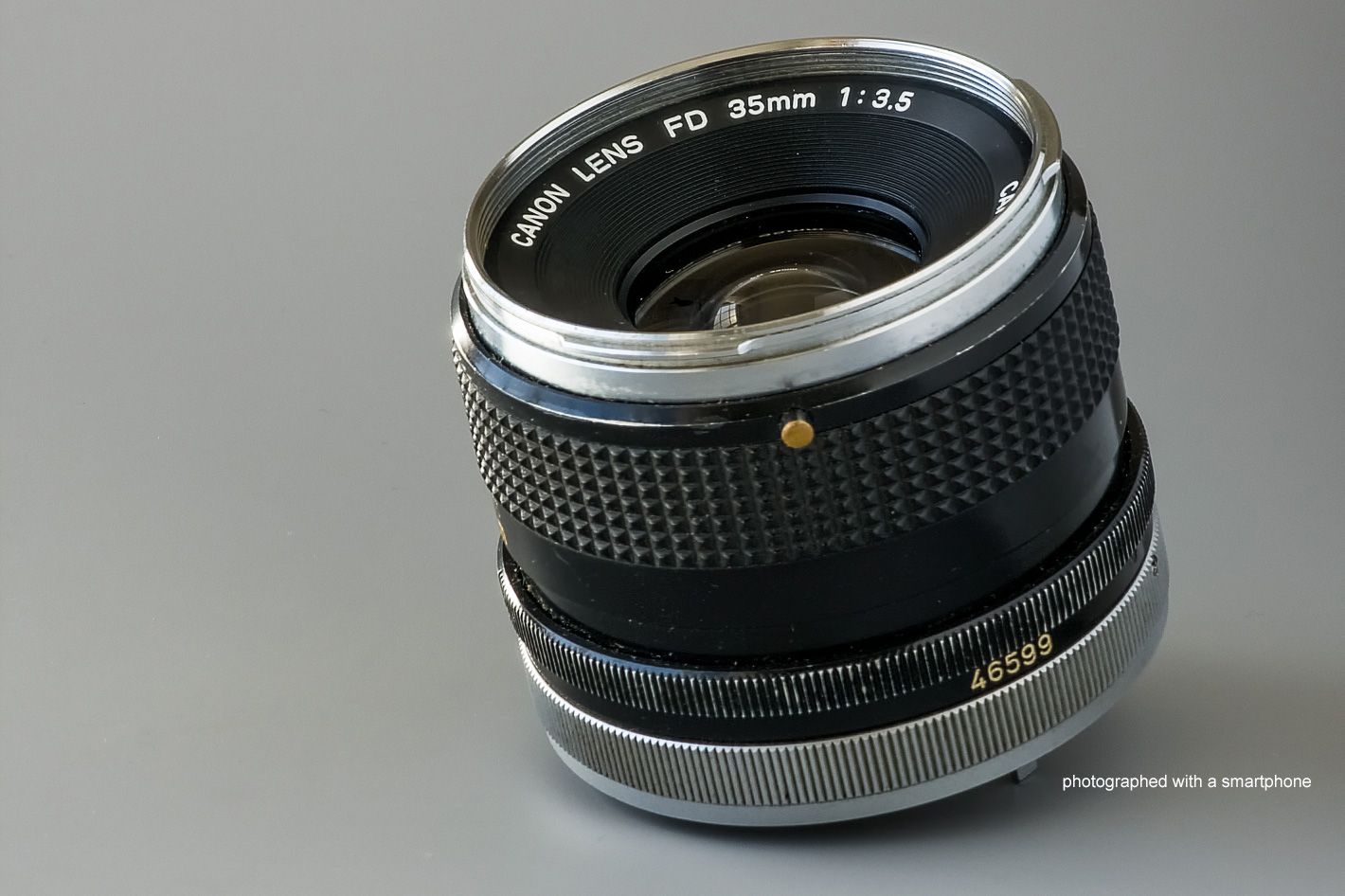 While I understand smartphone users’ craze for ultra-wide angles (i.e. 12-20mm), they’re not – very – common in the long history of photography. The 50mm, which earned the nickname “nifty fifty”, was the go-to lens for anyone trying out the 35mm format, which is the most popular of the multiple formats available. My first lens, for a Canon SLR, was a 50mm, which I used exclusively for a few years before buying a converter that transformed it into a 100mm lens, ideal for bringing subjects closer and… for portraits.

Professional photographers, especially photojournalists, embraced 35mm as it was ideal for covering everything, allowing more information to fit inside the frame without excessive distortion. An example is the Canon FD 35mm f/3.5 – shown in a photo here – which is usually attached to an old Canon FTb QL that I still have – and still works if you feed 35mm film to it – is an example of a classic 35mm lens, and one that I have used for many years. My other 35mm lens, which was attached to a damaged black Canon A-1, went missing when the camera was stolen… 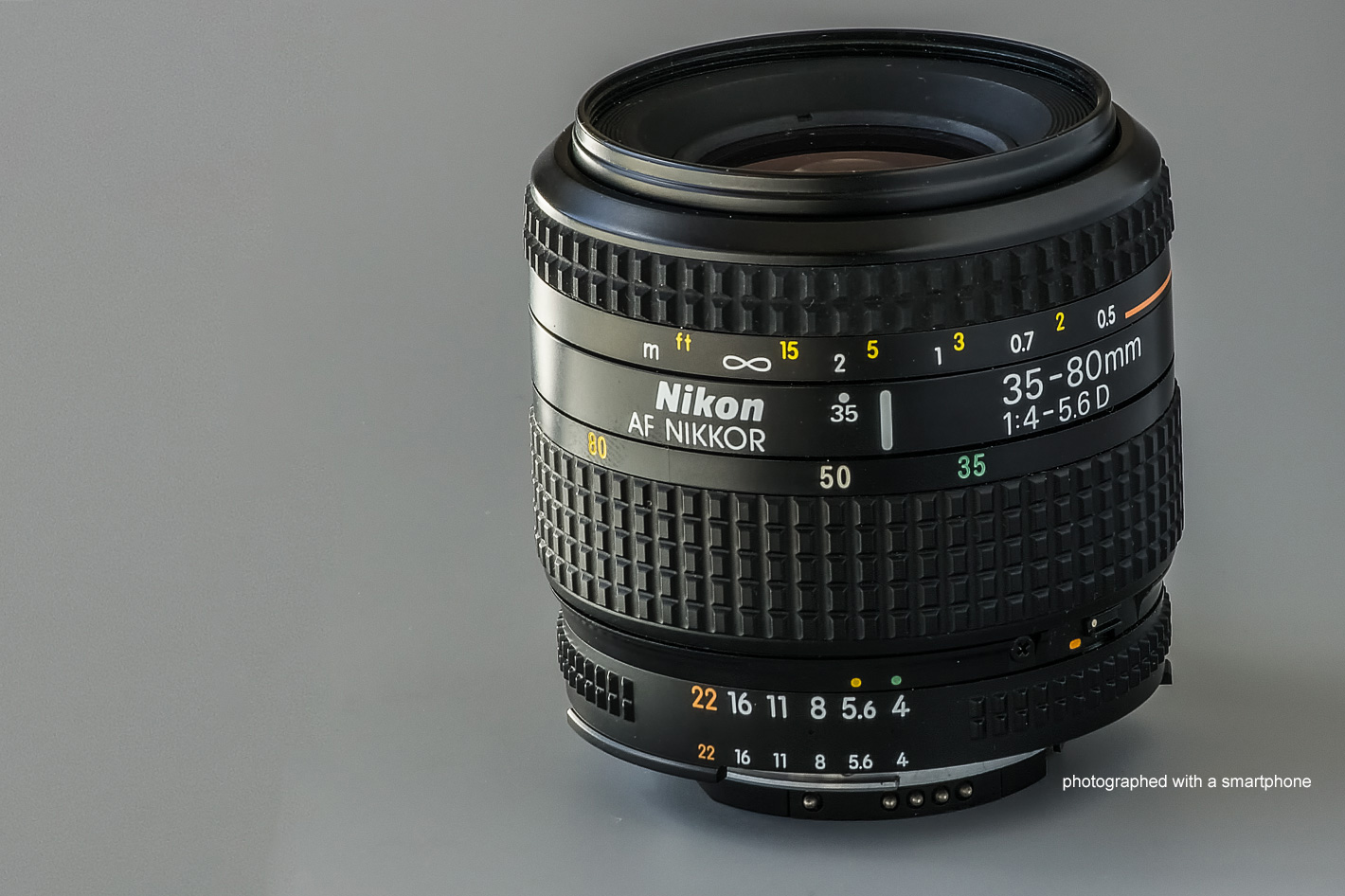 The evolution from prime lenses to zooms

The 35mm was also a good lens for landscape, at least until the arrival of the 28mm, followed by the 24mm, with better optics and less distortion than earlier examples. Suddenly there were plenty to choose from, starting with even wider focal lengths, but common kits for many photographers included a 35, 50 and telephoto lens, between 80 and 135mm, considered ideal for portraits and for bring distant subjects closer.

So what Motorola now offers in its flagship smartphone, Frontier, is a classic trio of prime focal lengths that photographers have been using for decades, before zooms arrived and changed the landscape. Although early zooms weren’t prime lenses, having the ability to choose any focal length between 35mm and 80mm… without having to change lenses meant that zoom was going to be king. That explains lenses like Nikon’s, an AF Nikkor 35-80 f/4-5.6D, which was part of any Nikon kit many years ago.

As technology advanced, better zoom lenses were designed and adopted by photographers. Photojournalists stuck to the classic 28-70mm f/2.8 versions from various brands – paired with a 70-200mm f/2.8 – meaning they could cover virtually anything with just two lenses. As optical systems improved, everything from fish-eye to extremely long telephoto lenses were introduced, allowing different types of photographers and filmmakers to better express themselves. Suddenly zooms with focal length ranges of 10-20mm or 17-40mm became mainstream, with long 100-400mm or 150-600mm at the other end meaning anyone could frame his subjects as he intended…without needing to carry multiple lenses. around. 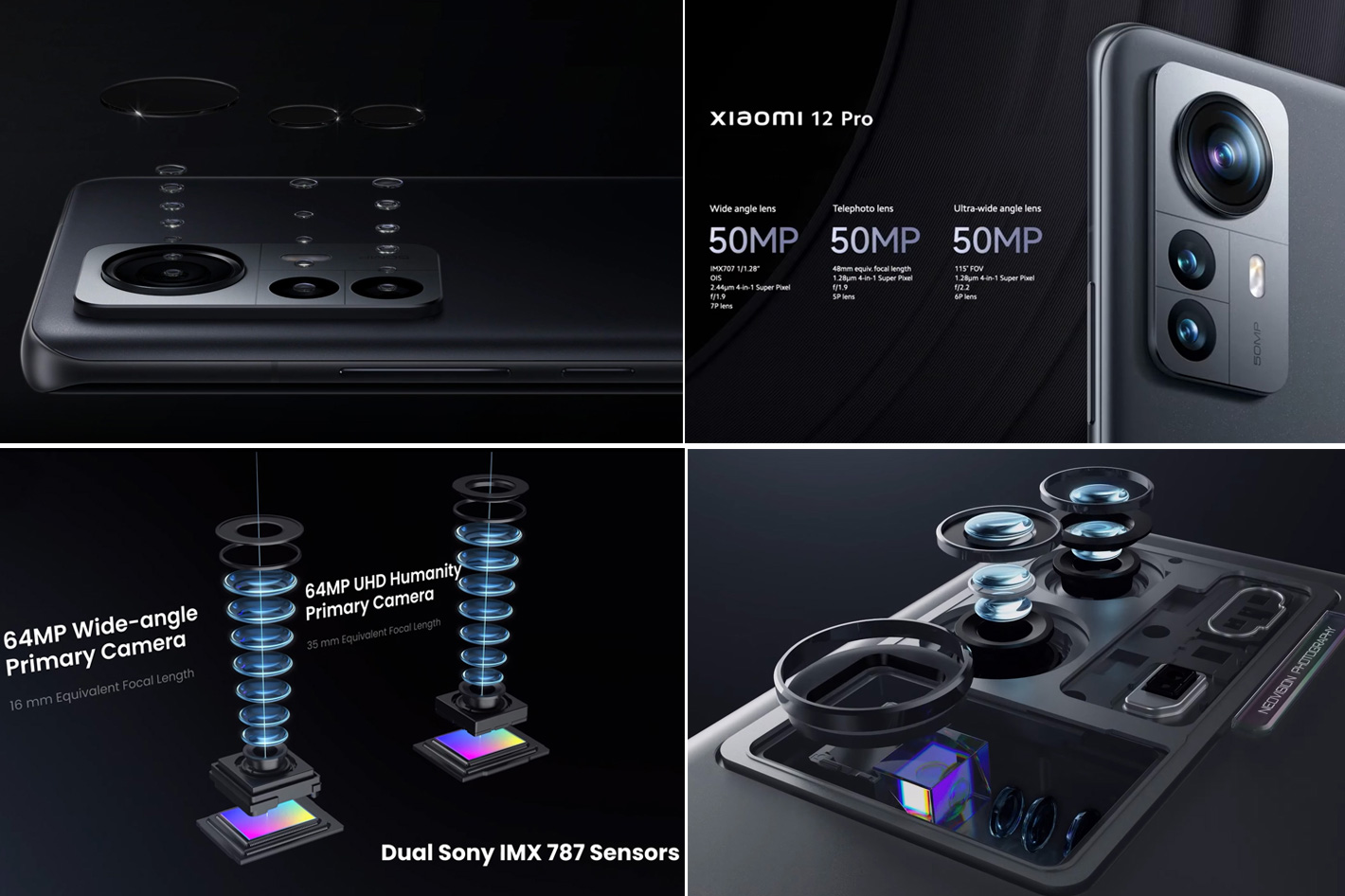 Smartphones have not yet integrated zooms into their functionality, despite certain promises from Oppo (an 85-200 mm optical zoom announced in 2021…) and other brands. The first true optical telephoto zoom in a smartphone appeared, last May, in the Sony Xperia 1 IV, which features a humble focal length range of 85-125mm, spanning values ​​typically associated with portrait lenses. It’s a start for something we expect to see grow in the months to come.

If there will always be outliers regarding the new trend – the next Xiaomi 12 S Ultra will have a “conventional” 24mm main camera, with a 12mm ultra-wide-angle module and a 120mm telephoto lens -, as exists in conventional photography (an example being Canon’s EF 35–350mm f/3.5–5.6L USM, introduced in 1993), the fact that some smartphone brands are beginning to offer focal lengths of 35mm to 85mm suggests that smartphone photography may be on the way to more closely emulating what the 35mm format offers, at least within the limits imposed by the size of mobile devices and the difficulty of designing objectives.

The choice made by ZTE and Motorola may indicate that the industry is moving closer to “conventional” photography. As users become more interested in photography, they may be willing to trade the ultra-wide angle and even the main 24mm camera of most smartphones for a regular 35mm and a real one. portrait lens, which can help achieve better portraits with natural blur. backgrounds, without the need to use artificially created bokeh, as is now the case with smartphones. Anything from a true 80mm lens can help make portraits look more appealing and less contrived. 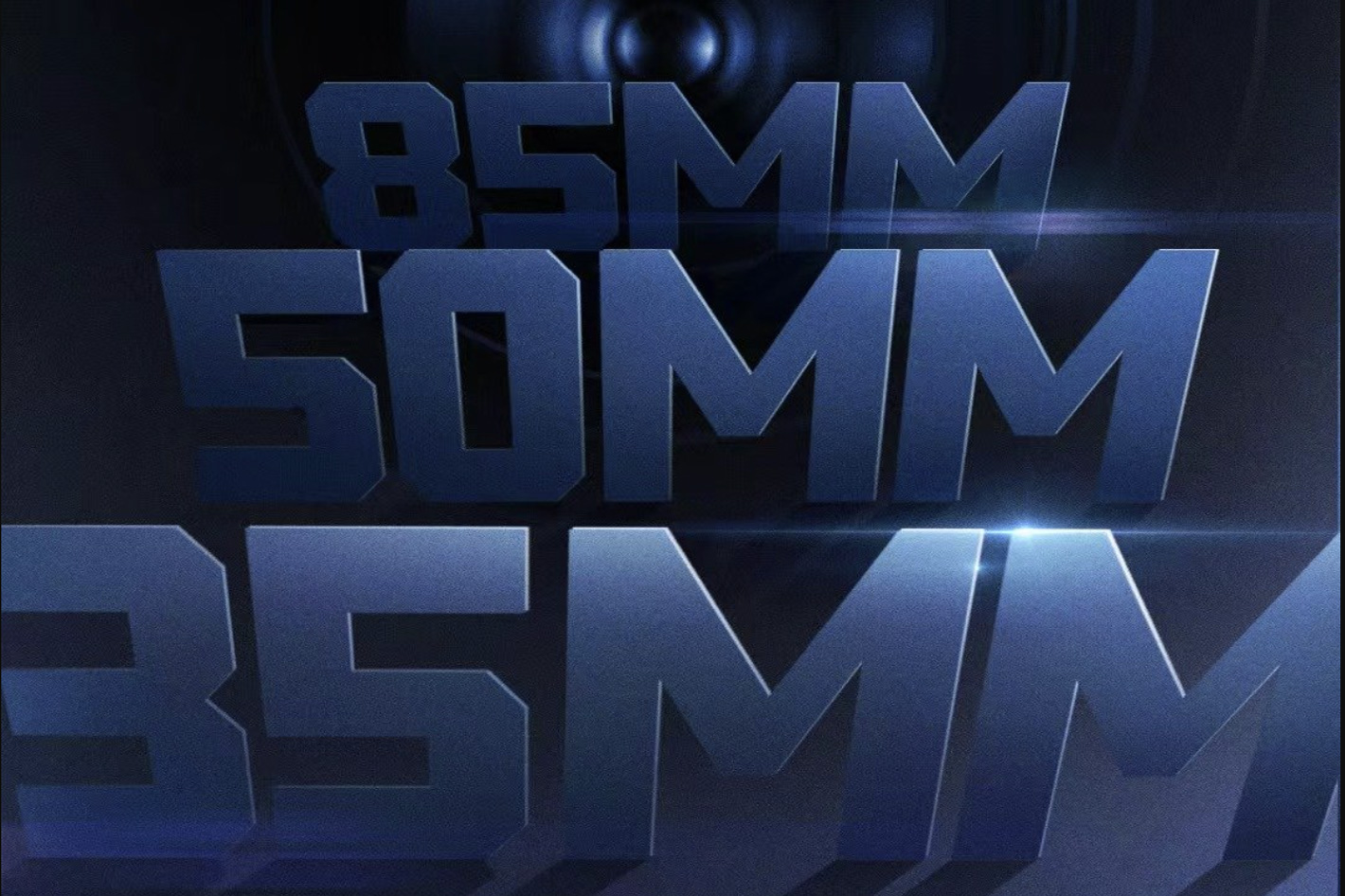 While it’s difficult to find the ideal set of lenses to satisfy the needs of different smartphone users, the 35, 50 and 85 mm values ​​are a good starting point. For now, we can leave zooms out of the equation unless they’re achievable at prices most users can afford, but even with premiums there are certain combinations that smartphone makers can do to offer interesting kits. The Samsung Galaxy S22 Ultra I’m using, while sporting a set of usual smartphone focal lengths, already has two optical telephoto lenses, 70 and 230mm, which expand the creative options.

Now, while the industry also seems to be moving towards camera systems that use similar sensors in terms of resolution – triple 50MP in the Xiaomi 12 Pro, triple 64MP in the ZTE Axon 40 Ultra – moving towards focal lengths like those described seems even more promising. As sensors evolve and get more pixels, it becomes viable, even starting with an 85mm optical lens, to double its focal length to 170mm, with digital cropping, and still get good pictures. In some cases, even going up to 250mm, or about 3 times, is within the realm of possibility. This is perhaps something that will help a lot in discovering the power of telephoto lenses for creative photography and video.

Some would argue that by using a 35mm lens on the main camera and not offering wider focal lengths, like 12mm, the ability to create larger landscape images is taken away from users…but that’s forget the advantages of modern photography: you can create a panorama, which is something almost automatic in smartphones. Now imagine having the possibility of creating your panoramas with the 50 mm lens of your smartphone, and you will understand – especially if you come from classical photography – that there is a whole world of possibilities that opens up before you. you.

Smartphone makers just need to be ready to adapt and we may well be, as some of them are promising, on the threshold of a new era for imaging.